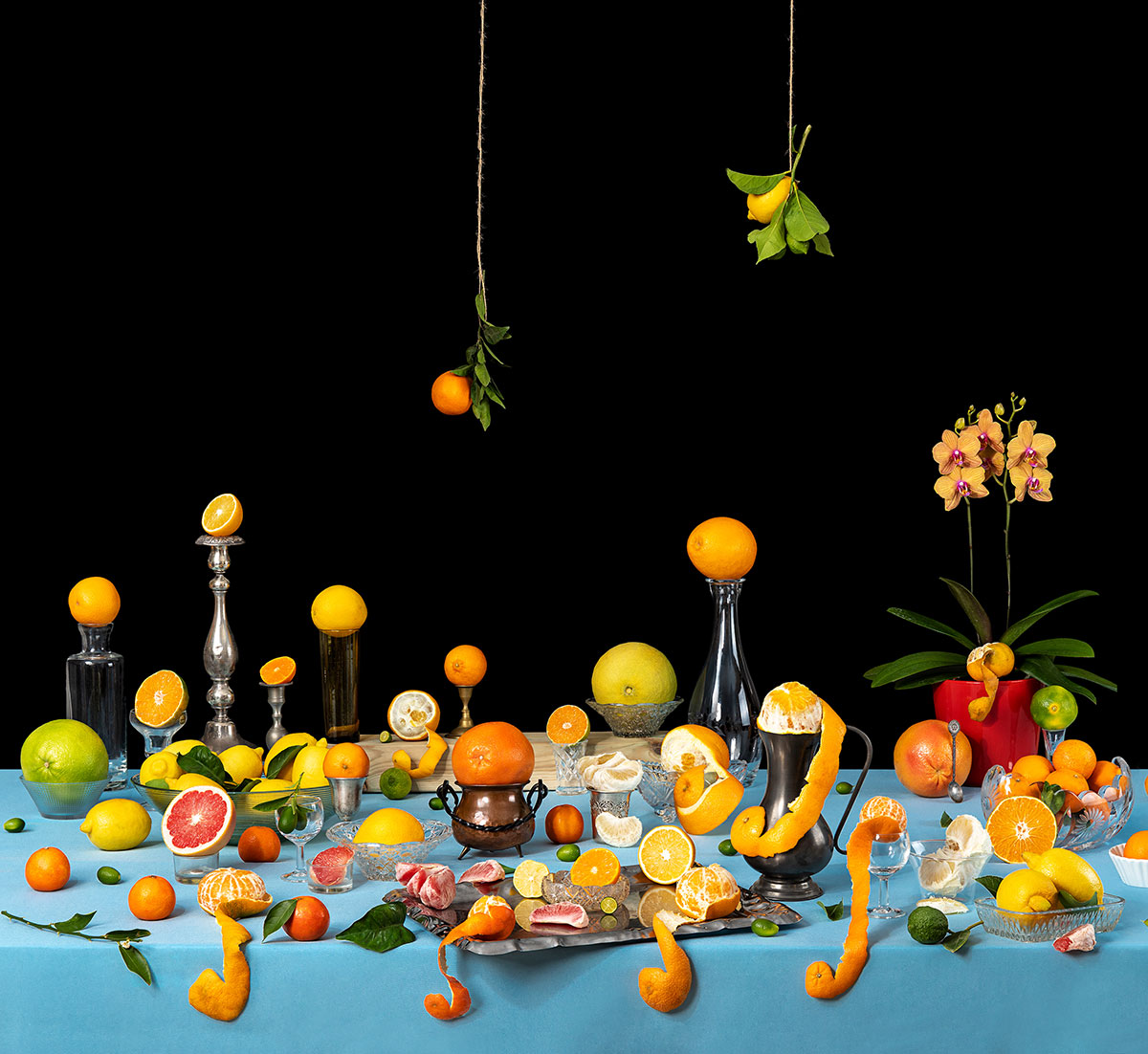 The commissioned artwork is selected annually through a public open call with the help of an expert advisory board and is presented on the New Covent Garden Market building façade in Nine Elms Lane, London.

Artists are invited to apply with proposals of artworks inspired by fruit, vegetables and flowers, the key products of New Covent Garden Market – the UK’s largest and oldest fresh wholesale produce market – and consider the market’s physical context and communities.

In his winning proposal the artist creates an image that reflects on the immortal nature of fruit. Reminiscent of the works of 16th and 17th-century painters and produced using the focus stacking technique, this hyper-realistic fantasy photograph glorifies the common objects of daily life. Inspired by ‘Bodegones’ by the Spanish master Juan Sánchez Cotán, which Granit came across while studying photography in Madrid, the image features an abundance of citrus fruits displayed on a large table in and around crystal glasses and vases, antique jars and trays, or hung from above, and complemented with arrangements of orchids and daffodils. Combining multiple images taken at different focus distances gives the resulting image a greater depth of field, creating this panoramic tableau outside the constraints of a single frame.

Rob Williams, Senior Director of Construction at St. Modwen, said:
“We are excited to have commissioned Eyal Granit’s ‘Still Life Citrus’ to be on display on the border of the redevelopment of the market, giving passers by a unique insight into the impressive market operating behind this very facade. This commission builds on VSM’s other community art projects based around the redevelopment area, including the acclaimed Edible Avenue on Thessaly Road and The Whale Wall at the nearby St. George’s school by renowned artist Mr. Dane”

Eyal Granit said:
“Citrus for me is going back to childhood. With this work I reflect on the ideas of home, belonging, memory and personal history. I have been passionate about photography since an early age and I am truly humbled to have received such an incredible opportunity to present my work to a global audience in London, where the public can encounter and enjoy it every day. That's where artwork and real life connect, and this connection somehow brings the work to life.”

Zarina Rossheart, Art Night Open Programme Director, said:
“It’s an honour to have been invited by VINCI St. Modwen to curate and contribute to the development of this exciting new public art initiative for showcasing artworks celebrating New Covent Garden Market following a hugely successful collaboration during Art Night 2018. I am proud to be working with Eyal Granit who presented a fascinating proposal for the Vitrine and especially thankful to the Advisory Board and market representatives for working with us on shortlisting the winning artist for this year’s commission.”

Click here to view the full press release as a PDF

As a cultural place-making specialist, exploring and thinking about the role art, culture and place have to play in the positive development of cities and communities, is at the forefront of Aida's work. A strong advocate for meaningful, culturally led regeneration, Aida has a proven track record of developing sustainable partnerships, creative producing and commissioning artwork both within art institutions and in the public realm. For over 10 years Aida as been working closely with London’s local authorities, developers and communities to ensure appropriate, exciting approaches to the creation of new places to live, work and play.

Anna Skladmann combines photography and scanning techniques to reflect critically on aspects of contemporary life and politics exploring notions of nature and society, cultivation and the machine. Her latest project focuses on the gendering of humans' attitude towards the environment with an interest in the possibilities for alternative female-focused narratives rooted in the natural world.

She received her MA from the Royal College of Art and her BA from Parsons School Of Design. Her work has since been nominated for the Prix Pictet and Paul Huf Award, and has also won the Arles Photo Folio Prize. Her photographic projects have been shown in exhibitions and festivals, including the Maison Européenne de la Photographie in Paris, Museum of Modern Art in Moscow, Fotofest International in Houston, Unseen Photo Fair in Amsterdam and the Museum für Kunst und Gewerbe in Hamburg. She currently lives and works in London.

Charlotte Brooks is the Art Curator at the RHS Lindley Library in London. She has worked with the Society’s botanical artworks for over 15 years; caring for, documenting, researching and developing this world renowned collection. As the Secretary to the RHS Botanical Art Judging Panel, she supports a lively, international community of practising artists to exhibit their work and to be judged for medal awards at RHS Shows. She has recently published her first book ‘RHS Botanical Illustration: The Gold Medal Winners’.

Lynn Parker has worked with Kew’s Collection of Scientific Plant Illustrations since 2007, and have been the Collection Curator for the past three. Previously to that Lynn was working in Collections Management at the Victoria and Albert Museum and as a Curatorial Assistant at the Pitt Rivers Museum. Lynn is interested in the history of botanical illustration as a documentary record or even a social history.

For the past 3 years Zarina Rossheart has been the director of Open Programme at Art Night, London's largest contemporary arts festival. Within her work Zarina focuses on supporting independent early-career artists and curators and creating collaborations with London’s local arts organisations. In 2018 she produced LDN WMN, a series of public artworks across London by women and non-binry artists, a project initiated by City Hall and Tate Collective. Zarina is currently curating the annual site-specific commission for the building facade of New Covent Garden Market in Nine Elms to launch in October 2019. 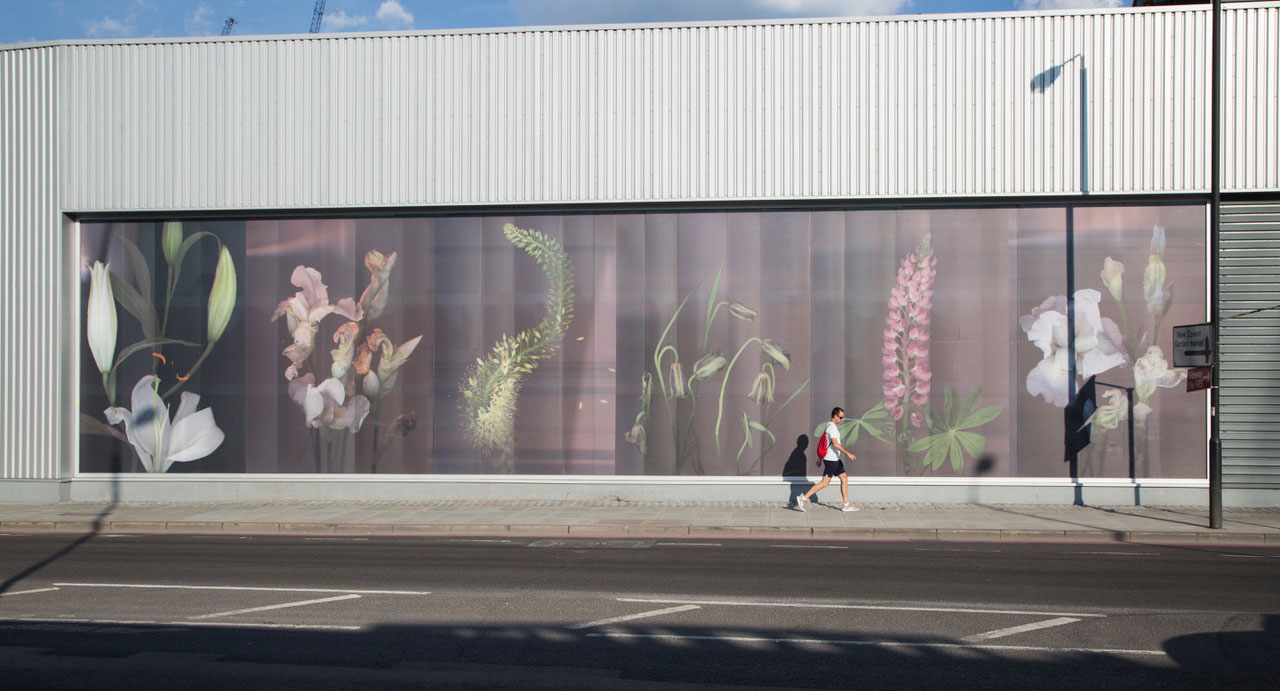 ANNA SKLADMANN’S 'GHOST IN THE MACHINE'

Anna Skladmann’s ‘Ghost in the Machine’ was the first art work to be exhibted on the Flower Market facade last year as part of Art Night 2018. The  incredible feedback received sparked the idea of an annual commission, facilitated by Art Night, that VINCI St. Modwen will fund over the course of the  next three years.

What did having your artwork displayed at the Market mean to you?

Anna: To be able to create a series for the New Covent Garden Flower Market was a truly unique experience. I work with scanning techniques so for  this commission being able to work on such a grand scale was an incredible step in my practice. As it became a piece which is viewed from the outside  but wraps up the nature of the market and what’s happening inside felt like being commissioned and brought the practice of art back to its origins of  patronage.

How did the Market inspire your final creation?

Anna: I sourced all the flowers from the market. I would walk around the stands talking to each trader about the special sorts of flowers and their origin. I  was interested in the ones whose name and mythology is linked to the female representation of flowers, such as ‘The Bearded Iris’ or ‘The Blushing  Bride.’

Find out more about Anna’s work at www.askladmann.com and @askladmann on instagram.